We owe so much of our success to YOU!

We are here and we are doing the things! Quite simply, there is a lot we have accomplished together in the last year and so much more impact that your involvement with us will bring about in 2022.

ACT for Women and Girls launched the RJ Collective this summer – a weekly community space led by women and queer identified youth of color to help inform comunidad in the Central Valley about a range of issues, including abortion access in the post-Roe era.

Workshops cover issues such as youth voting, queer inclusive sex ed, and abortion access in the Central Valley. Together with the staff, Alexis helps facilitate many of these topics. And since Roe was overturned last June, the RJ Collective has become the safe space people need to air their feelings, share their worries, and stay informed.

We meet people where they are.

Alexis found a sense of community when they joined their first ACT meeting as a freshman in high school. One of the first campaigns Alexis joined sought to change the voting age from 18 to 16 in local elections. Other efforts included sanctuary protections for undocumented students. He calls it sacred work.

Now at 19 and a sophomore in college, Alexis credits the staff at ACT for how passionate they are about social justice and policy advocacy. And that’s because the ACT team not only base-builds and educates, they also mentor the young people who turn to ACT for the safe, affirming space it offers to queer, enby, trans, and gender-expansive youth of color.

Despite all odds, and frankly because of them, ACT is doubling down and recommitting to serving women and girls in our neighborhoods, including queer, young parents, and youth of color. In light of the current political climate and the post-Roe environment, we are holding the hard conversations and reimagining what’s possible.

People in the Central Valley are fighting like hell for reproductive freedom – for human dignity. This community is committed to thriving, not just surviving, and we will not be overlooked. In the wake of the fall of Roe, ACT for Women and Girls is actively engaging young people at the local level. Together, we are building power and fueling hope.

You  will agree with us that ACT is a community anchor and the go-to resource in the Central Valley for Reproductive Justice, and a launching pad for countless young people like Alexis.

I’ve seen so many youth who are flourishing and doing great things for the community – many of them have influenced me as well. I am just one of several people who have been inspired, motivated, cultivated by ACT.

Through an evolving, multi-year pandemic and with limited staff capacity, we are fiercely moving hacia adelante! We are phone banking to keep everyone informed about our rights. We are gathering virtually to grow our knowledge and uplift the community.

You shine in your support of this work. Your advocacy has strengthened youth agency by continuing to demand young people’s access to comp sex ed. Your donations have helped expand inclusion of talent and voices from impacted communities by bolstering youth-led activism and grassroots leadership.

Thank you for all you are doing to advance the Reproductive Justice movement in the Central Valley, it means everything.

Author: ACT For Women and Girls 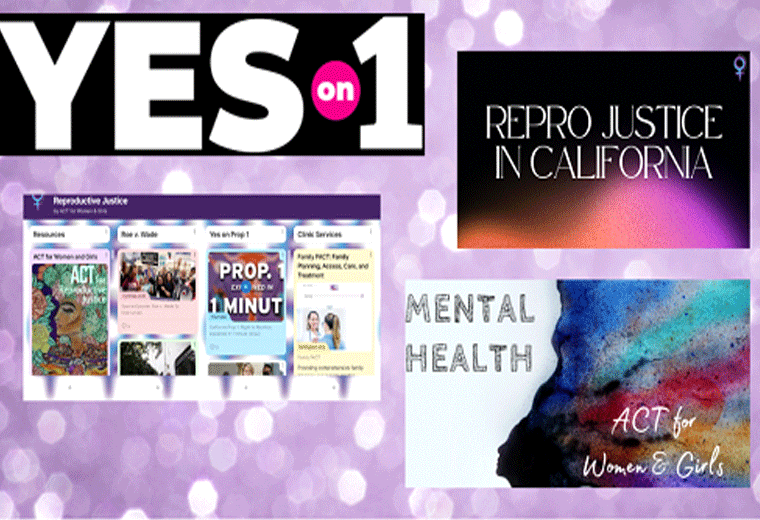 Message from Our Chair

Please help us find the next extraordinary leadership for ACT for Women and Girls!